Having had a trial with the Pontypridd senior squad, but failing to make the cut on that occasion, Jason joined up with Glamorgan Wanderers in 1998, from where he was capped by Wales under 21s. Playing an integral role as a prolific points scorer, Jason won honours in the seven a side game with Crawshays and the Wales national squad, whilst helping the Wanderers climb the league ladder from division three to division one. 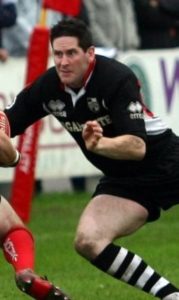 As his goal kicking exploits continued to flourish, Jason went into the record books as the scorer of the most conversions in one season, and the first player to reach the 1,000 point target in the Welsh leagues.

In the summer of 2003, Jason was given the opportunity to join up with his home town club of Pontypridd, and underlined his reputation as a deadly marksman, kicking eleven conversions without a miss in his first game, ironically against his old club, the Wanderers.

Establishing himself as a key member of the Ponty squad, Jason continued to contribute as a prolific points scorer, but also as an effective line breaker in midfield, playing a crucial role in the club’s successful cup winning run of 2006.

Finding his opportunities limited in 2008,marksman Jason made the move back to Glamorgan Wanderers and later went on to coach LLantwit Fardre.