Andy Phillips was an influential outside half for Pontypridd at the turn of the nineties, having previously played for Newport and Ebbw Vale. 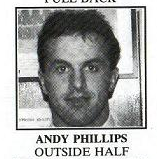 He totalled 70 appearances for the club, amassing 590 points through 28 tries scored, 116 conversions 78 penalties and 4 drop goals.

He featured in the narrow 22pts to 23 defeat against the touring Western Samoa team in 1988.