If one person could ever be set as an icon for Pontypridd RFC, from amongst many honourable candidates, the one who stands head and shoulders above the rest is the “bionic elbow” – Bob Penberthy.

Following his debut against Penarth on 1st November 1961, Bob went on to play an incredible 877 games for Pontypridd, a feat that will surely never be surpassed. 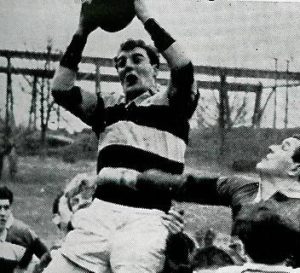 Bob represented the Barbarians and toured various destinations such as Canada and Germany with his club, but mostly spent his time, week in week out, plying his trade in the rough-house environment of the line-outs of Welsh club rugby.

In doing so he gained the total respect of all who played against him and had the pleasure to watch him play.

After retirement Bob continued his work as a linesman with South Wales Electricity, with his Saturdays devoted unfailingly to following the club which he served with such great distinction for so many years.