Born in Church Village, Lee Pearce gained international honours with Wales under 19s before joining up with Caerphilly. 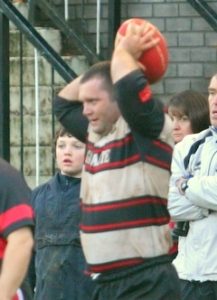 Captaining the Castletown team in the first division in 2005, Lee then joined up with the Pontypridd senior squad on the eve of the 2006 – 2007 season.

Lee departed Ponty in 2008, linking up with Premiership rivals, Bedwas.