Born in Thames, New Zealand, Sonny Parker progressed through the Auckland provincial grading system being nurtured for much of that time by future Welsh national coach Graham Henry.

His early senior experience came with the Auckland Marist club from where he gained international recognition with the New Zealand Maori Colts. 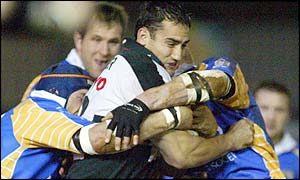 As part of a rehabilitation exercise following a leg injury Sonny spent a season playing club rugby in Italy before a recommendation from Graham Henry brought him to the attention of Pontypridd whom he joined at the start of the 1999 season.

Soon establishing himself as a potent force in defence and attack with a trademark ability to make gliding breaks in midfield, Sonny was uniquely called up to the Welsh Development squad in readiness for his qualification for his adopted country, a sure sign of future international honours to come.

Sonny’s forceful contributions on the field of play are in contrast to his quiet and unassuming manner, both of which have made him a huge favourite with Pontypridd supporters.

In 2002, Sonny qualified for Wales after fullfilling his three year residency period. As a result of the regional revolution in 2003, Sonny left Pontypridd to play for the Celtic Warriors and then the Ospreys.