As a Blues Academy player, Patrick Palmer was initially allocated to Cardiff RFC and played much of his rugby in 2008 for his club of origin, Llantrisant. 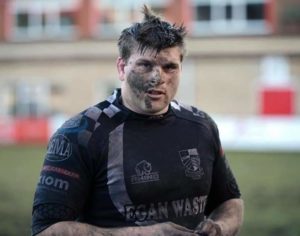 The tight head prop had been a key member of the Wales under 20s squad which contested the age grade World Cup during June 2008, and was a highly valued addition to the Pontypridd squad during the 2008-2009 season.

Making his mark as a solid scrummager, and an industrious operator in the loose, typifying the role of the modern front-rower, Pat was called up to cover for the Blues senior squad in 2009.

Later that year, Pat was signed up by the Gwent Dragons, with further representative honours coming his way with an invitation to play for the Barbarians.

Having been released by the Gwent region, Pat re-joined Pontypridd in the summer of 2011.

A series of back and shoulder injuries hampered Pat’s contribution as the anchorman of the Ponty scrum, and following further setbacks in recovering from successive shoulder operations, entailed early retirement from the game in January 2017.