Born in nearby Church Village, Michael graduated through Beddau juniors to Pontypridd Youth which he captained in their cup winning season of 1998. Although a year under the age group he starred in the Welsh under 19s FIRA World Cup campaign and became a regular in their lineout through to the final against the All Blacks. 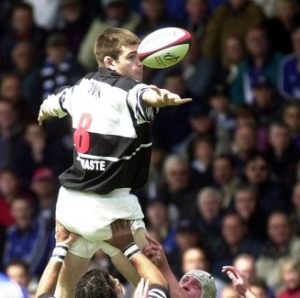 Still qualified for Ponty Youth, Michael was fast tracked into the senior squad for the 1999 season making his debut in a bruising friendly against Canada and soon establishing himself with performances of a mental and physical maturity way beyond his years.

His huge potential was confirmed with a call up to the Wales Elite 2000 squad – a gathering of young players targeted for future international honours.

The departure of international Geraint Lewis from Pontypridd before the 2001 campaign saw Michael claiming the no8 shirt as his own, earning rave reviews for his efforts he became a regular in the Wales under 21 team and selected was for successive national development tours to Canada and Japan.

On Saturday the 8th of June 2002, Michael made it into the history books by becoming the 1,000th player to be capped by Wales, and helped Pontypridd achieve victory in the 2002 Principality Cup final, and success on the European stage too, narrowly losing to Sale Sharks in the final of the Parker Pen European Cup.

In 2003, at the advent of Regional Rugby in Wales, Michael moved to the Gwent Dragons regional team, and latterly London’s Saracens team. Michael later became captain of the Grand Slam winning Welsh team of 2005, and captained the British & Irish Lions.

A knee injury ended Michael’s career at the age of 29, and put pay to the heroics of this all-time Ponty legend.