Arwyn Owen stepped into the Pontypridd senior squad in 1953 primarily as an outside half, just as Wales international Glyn Davies was vacating the position. 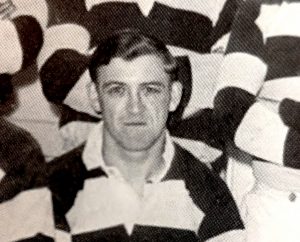 Over the following decade Arwyn proved to be a hugely influential player and went on to make well over 200 appearances in which he scored 49 tries. His commitment to the cause was highlighted by a willingness to cover all positions behind the scrum and as in a game against Penzance in 1955 when he played on with a broken jaw.

His versatility was a bonus for the club as later in his career he moved over from outside half to centre as Billy Griffiths made the No10 shirt his own. Arwyn played his last Ponty game in November 1962, in what was to be a championship winning season for the club.

Following his playing career Arwyn Owen continued to make a significant contribution to the game as editor of the hugely popular Welsh Brewers’ Rugby Annual.