A native of the Rumney area of Cardiff, Wayne O’Connor progressed through the junior and youth teams of his local club. He was capped by Wales at under 16 level, as a prop. 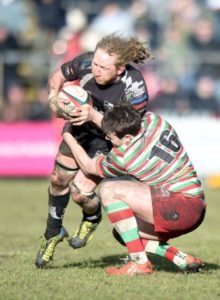 Adapting to the role of openside flanker, Wayne graduated into the Rumney senior team in 1998, playing in the First Division of the Welsh league.

An impressive run of displays as a hard grafting back rower earned Wayne a call to join Pontypridd for the 2002 season, where he made his mark, stepping up to the highest level, being a consistent presence in the club’s successful European campaigns.

Wayne took a year out of rugby in 2006/07 going walkabout in Australia and New Zealand, visiting family and travelling. Pontypridd were glad to welcome him back to add strength and experience to its back row armoury for the 2007/08 season.

In recognition of his unfaltering service to Pontypridd RFC for well over a decade, O’Connor was granted a testimonial season by the club in 2014.

During a fourteen season stint with Pontypridd, with 329 appearances to his name, Wayne O’Connor achieved legendary status for his endeavours, putting his body and soul on the line for the Ponty cause in each and every game he played.