Matthew Nuthall shot to fame at the end of the 2001/02 season with a man of the match performance in his first ever senior outing for Pontypridd against Bridgend. 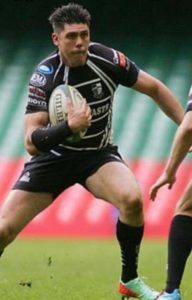 His rise to stardom continued with a place in the Ponty team which clinched the 2002 Welsh Cup against Llanelli, whilst still qualified at the youth age level.

Matthew was drafted into the Celtic Warriors regional squad in 2003, but turning out regularly for Pontypridd at club level, and in the meantime gaining international honours for Wales at Youth and under 21 level.

Following a spell contracted to the Blues regional squad, and turning out for Cardiff RFC in the Premiership, Matthew returned to Ponty for the 2005 – 2006 campaign, scoring a crucial try in the club’s victorious Konica Minolta Cup Final appearance.

In the summer of 2006 Matthew Nuthall once more moved on from Sardis Road, joining up with the Pertemps Bees in English League division two.

From Pertemps Bees he moved to Neath, before re-joining his hometown club in the summer of 2009.

Nuthall went to establish himself as a senior member of the Ponty squad, totalling 231 appearances during which he crossed for 77 tries.

In the summer of 2016 Matthew Nuthall stood down from the Pontypridd squad, moving on to take the role of player-coach with Caerphilly RFC.