A product of Porth RFC juniors, Geraint Morris was nurtured through the ranks of the Pontypridd Academy, gaining representative honours with Wales at under 21 level. 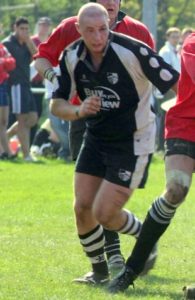 Whilst seconded to the Celtic Warriors regional squad as a development player, Geraint played for Pontypridd in their premiership campaign of 2003/04, making his mark as a mobile, but hard scrummaging loose head prop.

The following season, with the demise of the Warriors, Geraint moved on to represent Cardiff RFC, before joining Bridgend Ravens and then Pontypool RFC.