Nicknamed “Dai Rip and Tear” for his ball-winning skills in mauls, David Morgan was a product of the very successful Pontypridd Youth team.

Dai made 201 first team appearances for the Club over a 10 year period, commencing on the 29th of November 1969 with a match against Abertillery. 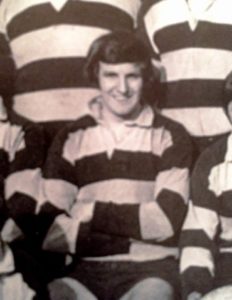 Originally an openside flanker, Dai was moved to No. 8 to accomodate Tommy David’s return to the club. Before the era where substitutions were permitted, Dai also filled in at prop, hooker, second row, and on the wing! An incredibly versatile ‘utility’ player, Dai was once picked to play at centre alongside Pontypridd legend, Joe Smith.

Dai battled through the difficult years during the transition from Ynysangharad Park to Sardis Road, but fondly recalls the “.. good times during the centenary season”.

Dai’s service to the club was rewarded by receiving the ‘Player of the Year’ award for the 1972/73 season.

Dai’s final match for Pontypridd RFC was one against Sale on the 3rd of December, 1977.