Hailing from the Gwent Valleys, Andrew Metcalfe came to prominence with Swansea as an effective tight head scrummager.

His move to Pontypridd in 1993 proved to be invaluable for the Sardis Road club, shoring up thor front row, and thus earning himself the nickname of “The Difference” for the impact that he made. 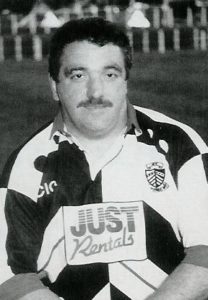 Andrew was a mainstay of the Ponty squad in their successful league and cup winning seasons in the mid nineties.

Having been suffering with a recurrent ankle injury, he left Pontypridd in 1997 to join up with Ebbw Vale.