Born in Cardiff, and having attended the capital’s Whitchurch High School, Gareth McCarthy joined up with Cardiff RFC, progressing from the under 21s to the senior club side. International honours had already been gained at under 16, under 18 and under 21 level, with Gareth being recognised as one of the foremost young outside half talents in Wales.

Gareth’s fast developing rugby career was hampered by a knee injury, but making the grade to the Blues regional squad, proving adept as a creative midfield general and a prolific kicker. 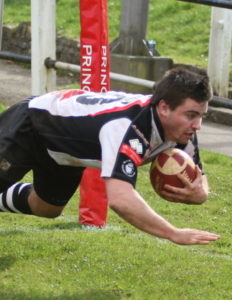 In 2006 Gareth joined up with Glamorgan Wanderers RFC, playing in the Principality Premiership, and proving to be a key player for the club both at outside half and inside centre. A call up followed at the start of the 2007 campaign to the professional ranks of the Gwent Dragons region, with Gareth playing some of his rugby on permit with Ebbw Vale.

A move to Pontypridd RFC followed in January 2008, the club offering Gareth McCarthy an opportunity to establish himself in the key outside half position, and Gareth in turn offering to the club the benefit of his undoubted talents and experience.

Gareth left Pontypridd in the summer of 2009 to join up with Neath in the Premiership.