Born and bred in Pontypridd, Paul Matthews joined up with the club’s Youth team, making a senior debut at outside half against Pontypool in 1996. 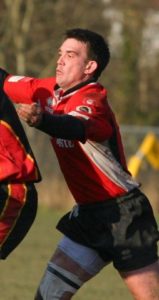 During his time there as a student, Paul represented UWIC before moving on in the year 2000 to join Ebbw Vale in the Welsh premiership. Playing mostly at centre, Paul was versatile enough to cover the full back and outside half positions, helping Ebbw in their successful Principality Cup runs to final appearances at the Millennium Stadium.

As the structure of Welsh rugby was fundamentally changed during the summer of 2003, with the advent of regional teams, Paul took the opportunity to make a welcome return to his home town club of Pontypridd. Captaining the club during the 2004 / 2005 season, Paul established himself as a senior member of the Ponty squad, offering the value of his vast experience both on and off the field of play.

Finding his opportunities limited in the 2007/08 season Paul took the opportunity to play for Merthyr RFC. After retiring Paul reverted to coaching, firstly with Mountain Ash then the Blues age grade squads, returning to Pontypridd as Backs Coach in 2018.