Now and again, a player arrives at Pontypridd RFC for only the briefest of stays, but making such an indelible impression that he is elevated to the status of an enigma. 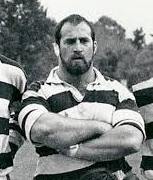 Having joined Pontypridd in 1996, with rumours of Welsh descent from Mountain Ash and international honours at A level with Argentina, Christian only made four appearances for the club, one of those against the USA Eagles touring team – when he was sent off – before departing with the same air of mystery which had surrounded his arrival.