Born in Tonyrefail, Chris Martenko was a late starter as far as competitive rugby was concerned, taking up the game at youth level with Gilfach Goch. There followed a four month stint with Bridgend Youth in 2002, before Chris moved back to Gilfach, graduating through to the senior team at a young age.

At the commencement of the 2003 season, Chris joined the ranks of the Warriors regional under 21 team, whilst also appearing on permit from time to time with Pontypridd. A permanent committment to the Sardis Road outfit came about mid season for Chris, who was employed as a railway engineering operative. 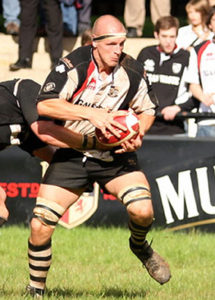 Putting in some notable performances for his club in their premiership campaign, as an industrious lock who relished the physical aspects of the game, Chris was rewarded with a call up to the Wales under 21 squad for the 2004 Six Nations and World Cup campaigns.

At the close of the 2005/06 season, Chris departed Pontypridd on accepting a development contract with the Ospreys. Injuries however plagued much of Chris’ professional stint, and in 2007, faced the prospect of an early retirement from the game.

2008  saw a change in Chris’ fortunes, having recovered from a major shoulder operation to commence playing for Ponty during the 2008 – 2009 campaign.

During his two spells at Sardis Road, Martenko turned out on 122 occasions for Pontypridd, scoring 12 tries. His final bow came on 5th November 2010 in the home game against Llanelli.