Although born in Essex, Dai Manley made his name with Newbridge in the Gwent Valleys, gaining representative honours with Wales A. 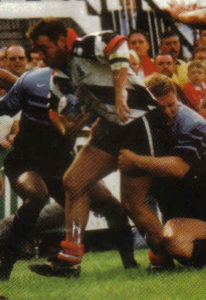 Upon moving to Pontypridd in 1993, he made an immediate impact, becoming top try scorer in the Welsh league in his first season.

Deceivingly quick off the mark, and with a sidestep that threw most opposing defences, Dai notched up a total of eighty tries for Pontypridd, making a huge contribution to the club’s golden era in the mid nineties.

Dai left to play for Pontypool, and later became rugby co-ordinator at UWIC.