Originally from Bridgend, Brendan Lyons played his junior rugby for the Llanharan and Beddau clubs.

Having taken time out from the game, Brendan returned to the fore with Llanharan RFC during the 2008 season, and turning out for Beddau and Gilfach Goch during the following campaign. 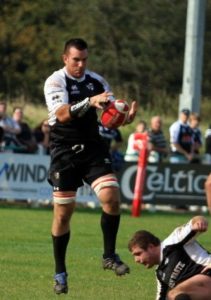 His new-found appetite for the game gave Brendan the opportunity to link up with Pontypridd during the summer of 2010 as a trialist. Making a big impression as a ball carrying back row forward in the club’s pre-season games, Brendan was duly signed up to the senior Ponty squad.

Brendan suffered a serious leg injury whilst playing on permit for Llantrisant in 2010, and never regained full fitness. Brendan was subsequently released from the Ponty camp at the tail end of the 2010-2011 season with a tally of 5 points to his name.