Matthew Lloyd was one of the best young back row prospects around when he broke into the Cardiff senior team, and won international honours with Wales under 21s. 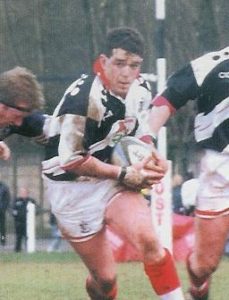 A serious knee injury sustained when playing for Wales against Scotland in 1990 threatened to scupper his playing career, but a move to Pontypridd gave him a fresh start, and one of which he took full advantage.

Becoming a regular at blindside flanker or no 8 for Ponty, Matthew won plaudits for his dogged performances, putting in countless tackles and grafting for possession on the fringes of ruck and maul.

He forced himself back into international recognition with the Wales A team and played for Pontypridd against the touring South Africa and Fiji national sides.

A schoolteacher by occupation, Matthew progressed to being coach of the Pontypridd Academy, and then coach of Llantwit Fardre.