A locally bred Hopkinstown boy, and having played for the Ponty Youth and Academy teams, Geraint Liddon came to the fore at Caerphilly, playing in the club’s successful European Shield and Welsh Cup final sides. 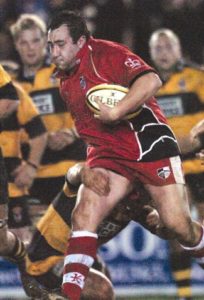 Having won representative honours with Wales under 21s, Geraint moved back to Pontypridd in 2004, providing valuable front row cover on the loose and tight head, and making 30 appearances for the club.