“Stella” as this uncompromising centre was known to all at Sardis Road, was a true one club man, giving his all for Pontypridd since joining up from his village club of Gilfach Goch in 1986. 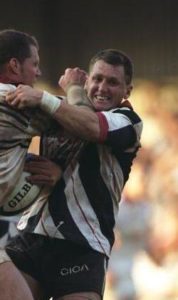 Gaining an awesome reputation on the Welsh club scene as a tough tackling midfielder, Stella became a regular in the Wales A team since winning his first cap against France in 1989, and toured Australia with the senior national squad in 1991.

The mainstay of Ponty’s threequarter line throughout their Cup and League Championship victories in the mid nineties, and many an epic encounter against top European opposition such as Brive, Bath and Leicester, when Stella spilt blood for the cause, it flowed in black and white.

Stella progressed straight from being a player to backs coach at Sardis Road, before work commitments forced him to stand down in 2004.