Caerphilly born, Mark Lewis came up through the ranks of the Pontypridd Academy, gaining international honours with Wales at Youth and under 21 level. 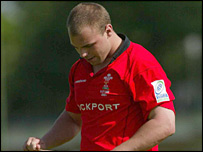 He progressed straight into the Celtic Warriors regional squad, although playing a number of games on permit for Pontypridd in the premier division.

In 2009, after failing to overcome a serious knee injury, and at the tender age of 26, Mark Lewis called time on his Rugby career.