Jason Lewis followed his elder brother Steele into the Ponty ranks, having progressed from the club’s youth set up. His senior debut came against Newport in October 1990, partnering Neil Jenkins in the centre. 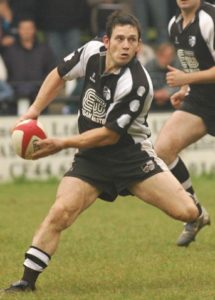 Jason went on to become a true stalwart of the Pontypridd side during its unprecedented successes in the 1990s, partnering international class centres such as Dafydd James and Sony Parker.

His hard tackling displays and his ability to thrust over the gain line in midfield made Jason himself a regular with the Wales A team, and also winning recognition with the Barbarians.

Jason Lewis remained a loyal one club player, representing Pontypridd on 375 occasions, and thus earning a place amongst the all time greats of the club, a fitting honour for a committed and unassuming player.