Geraint Lewis joined Pontypridd having developed through the ranks of Llantwit Fardre and UWIC, and already having gained recognition as an outstanding back row prospect. 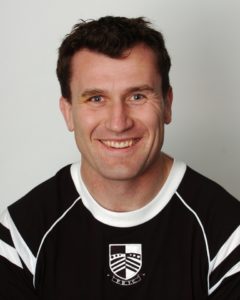 His role as a creative playmaker off the back of the forward unit further enhanced his reputation, with international honours for Wales at A and senior level to follow, winning his first cap out in South Africa in 1999.

Geraint moved to Swansea for a while, only to return to Pontypridd for another spell in the year 2001.

His stay proved to be a short one, departing to join newly promoted Rotherham Titans in the English premier division in the summer of 2003, before moving on to Bath in the Autumn of 2004.

A spell as coach with Aberdare followed, with Geraint moving to Ebbw Vale in June 2013. His tenure at Eugene Cross Park was shortlived as in the following November Geraint was appointed as forwards coach by Pontypridd in the wake of Dale McIntosh’s departure.

Following a successful season at Sardis Road Geraint moved on to take up a full time post with the WRU as a skills coach.