Local boy Dillon Lewis came up through the ranks of Pontypridd RFC from mini and junior to youth level.

He had by that time been drafted into the Blues Academy and was given a placement back with his club of origin, showing huge potential as a solid scrummaging tight head prop and an effective ball carrier in the loose. 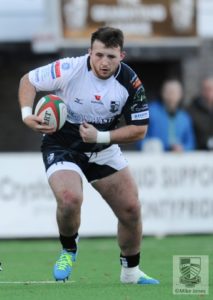 He also in the meantime won international honours with Wales at Youth and under 20 level.

Dillon’s apperances for Ponty became less frequent as he earned more game time at senior level with the Blues, his career taking another upward turn as he won a first senior cap for Wales against Tonga on the summer tour of 2017.