Rhondda boy Paul Knight earned a reputation as a solid scrummaging tight head prop, and was called up to senior duties by Aberavon in 1980. 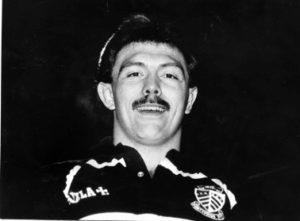 Still only twenty years of age he was drafted into the Welsh squad, and played for West Wales against the touring Australians in 1982.

In 1987 he accepted an invitation to join Pontypridd, coached at the time by Clive Jones, and soon established himself as the cornerstone of an effective forward unit, playing for the club against Western Samoa in 1988.

In 1990, the long awaited honour of a senior Welsh cap came his way, playing against Namibia, twice, on tour, the Barbarians, England and Scotland.

Paul was himself a Barbarian, representing the team against Argentina.

In 1992 Paul left Pontypridd to join Treorchy, where his first class career was curtailed by illness.

Paul became chairman of the Rhondda Cynon Taf MS society, showing the same qualities of grim determination in combating his affliction, as he did throughout his illustrious rugby career.