A native of Kilkenny in Ireland, Ken Knaggs represented Kilkenny RFC, Old Crescent RFC and Dolphin RFC in his homeland, whilst employed as a site manager in the construction industry. 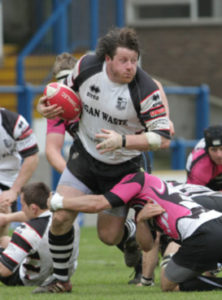 Ken also played hurling and basketball at a competitive level.

In 2009 Ken came over to Wales to study sports science and rugby at the University of Glamorgan, turning out for the college team.

Ken’s powerhouse scrummaging and abrasive presence in the loose soon came to the attention of Welsh clubs.

Following a brief spell with Glamorgan Wanderers, Ken accepted the invitation to join up with Pontypridd, initially on dual registration with Llantwit Fardre RFC but then as a full member of the senior squad at Sardis Road for the 2010 – 2011 campaign.

“Knaggsy” swiftly became a fan favourite, and departed the club in mid 2012 to return to his homeland. He departs with the fondest of farewells from the Ponty faithful.