Hailing from the Fairwater area of Cardiff, Nick Kelly played for Cardiff Youth before joining Gwent club Cross Keys, helping them to promotion from the first to the premier division.

Having established himself as a mobile, try scoring second row, Nick was called up to the Pontypridd ranks in 2001, by then coach Richie Collins. 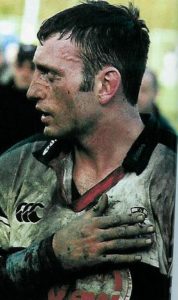 When Lynn Howells returned to Sardis Road to take the helm, he identified Nick Kelly as a blindside flanker, the move proving to be a highly successful one.

Nick played a big role in Ponty’s European successes in the Parker Pen Cup, and with the advent of regional rugby, was drafted into the Celtic Warriors squad, although still turning out for Ponty on permit.