Nick Jones joined Pontypridd from South Wales Police in 1992, initially as a second row forward, but then proving a revelation when tried in the blindside flanker’s position. 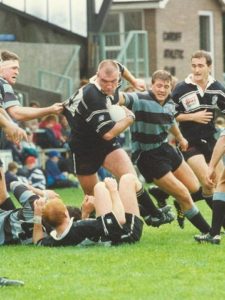 Always up to the physical demands of the game, Nick could be depended upon to take the game to the opposition in all phases of play.

Still a serving police officer, Nick then returned to South Wales Police before joining up with Rhondda Valley side Penygraig.