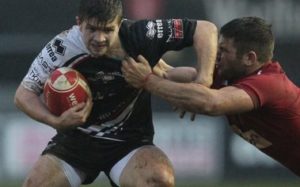 While studying at Ysgol Gyfun Rhydfelen, Lewis was called up to the Blues age-grade squads from under 16s through Under 18s, and was given a placement with Pontypridd RFC at the commencement of the 2010 – 2011 campaign.

Released by the Blues Academy in November 2010, Lewis Jones was offered a permanent contract with Pontypridd. He went on to play a significant part in the club’s successful campaign, culminating in a double try scoring, man of the match performance in the 2011 SWALEC Cup final.

The dynamic young scrum half also made his mark as a key member of the Wales under 20 squad.

At the commencement of the 2011 – 2012 season Lewis was drafted back into the Blues squad initially as an Academy player linked to Pontypridd but the following season elevated to the senior regional squad.