Len Jones played his first game for Pontypridd RFC on 3rd September 1949 against Penzance on the club’s Cornish Tour. He was a very skilful player, usually playing at scrum half, but he also played many games in the centre and once or twice at outside half as well. 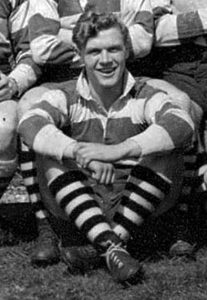 Len would go on to play 133 games for the club scoring nine tries, a conversion, and two dropped goals for a total of 35 points.