Kingsley Jones represented Pontypridd in two spells, firstly in the mid nineties, then returning to Sardis Road in 2002 scoring 15 tries during his tenures. 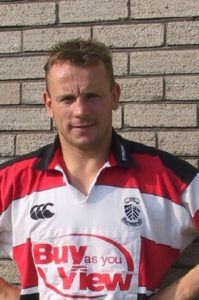 Born in Blaina Gwent, he came to Ponty initially from Cross Keys, and found it difficult to lay claim to the openside flanker’s berth, with other outstanding candidates such as Richie Collins, Phil Thomas, and then Martyn Williams all vying for the same position.

Kingsley left Pontypridd to play for Ebbw Vale and then to captain Gloucester in the Zurich premiership, in the meantime being capped by Wales, whom he led on their tour of South Africa in 1999.

Following his second spell with Ponty, he went on to become Director of Rugby at Doncaster RFC, and currently holds the same position at English Premiership high-flyers, Sale Sharks.