Although born in the south-west England city of Plymouth, WillGriff John was definitely a Rhondda boy, having come up through the ranks of Ystrad Rhondda RFC and Ysgol Gyfun y Cymer. 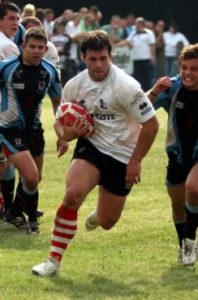 Nurtured in the fine arts of tight head propping by former Pontypridd, Wales and British Lions player Mike Griffiths, WillGriff gained international honours at all youth levels with Wales, and earning a call up into the Blues regional age grade system.

WillGriff was given a placement with Pontypridd RFC for the 2010 – 2011 season, making an immediate impact as a solid scrummager and tenacious worker in the loose.

WillGriff departed Pontypridd at the tail-end of the season, having been seconded to Cardiff RFC by the Blues management. He then went on to represent Sale Sharks in the English Premiership and to be called up to the Wales senior squad.