Having began his rugby career with Maerdy and Merthyr, Phil John joined Pontypridd in 1985, and over the next twelve seasons became a great favourite with the Sardis Road crowd. 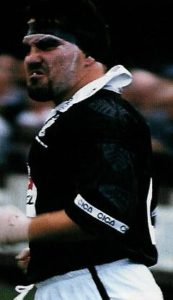 A tough character who never gave less than his all for the club, his performances characterised by his low angled charges into the heart of the opposition territory, Phil was an integral part of Ponty’s huge success as Welsh Cup and League Championship winners in 1996 and 1997.

Capped by Wales B, with whom he toured Canada in 1989, Phil also represented the Barbarians, and was a guest with the select World XV who played against South Africa.

How a full Welsh cap eluded this dynamic burrowing hooker, remains one of life’s great mysteries at Pontypridd.