Paul played his junior rugby for Llantwit Fardre, forming an early half back partnership with Neil Jenkins which was to last throughout their senior careers. Having played for Llantwit Youth, Paul joined Pontypridd Youth in 1987, before moving on to UWIC where he studied sports science. International honours had meanwhile been accumalated for Wales at under 15 and under 18 level. 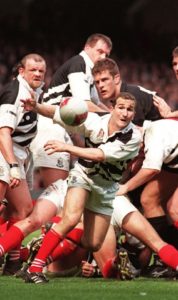 Whilst based in Cardiff, he played for the capital club for three seasons, before moving back to Pontypridd in 1992. Paul was by now established as one of the leading scrum halves in Welsh rugby, having been capped at under 21 level, with Wales “B” and with Wales “A”, whom he also captained.

A first senior cap followed against Tonga on the South Sea tour of 1994. Paul went on to gain ten caps for Wales, one as captain against Canada in 1997, but significantly sitting on the bench for his country on thirty-four occasions, considered by many to be desperately unlucky not to gain more caps, or indeed not to be selected on the Lions tour to South Africa in 1997.

Back with Pontypridd the Paul John/Neil Jenkins partnership was pivotal to the success of a club now coached by Paul’s father, Dennis John, winning the Welsh Cup in 1996 and the League Championship crown in 1997. Paul remained a stalwart of the club, leading his team to another Welsh Cup victory in 2002. With the advent of regional rugby the following season, Paul went on to represent the Celtic Warriors before returning to coach and play for Ponty in the 2004/2005 campaign.

Paul retired from playing in the summer of 2005, but continued to offer his wealth of experience to his young charges as coach. His talents in the new role were recognised with an appointment as Wales Sevens coach, going on to guide his squad to World Cup victory in 2010, and an appointment as National Skills Coach with the WRU.

In 2014 Paul John was appointed to the senior coaching team at Cardiff Blues, retaining a link with the Pontypridd coaching set-up in an advisory capacity.

A parting of the ways between Paul John and Pontypridd finally came in 2017 when he accepted a post as National Sevens Coach in Hong Kong. He had by then, over a period of thirty years as player and coach, rightfully earned his place as a true club legend.