Hailing from Ynysybwl, winger Owen Jenkins followed in the footsteps of his father, hooker Garin Jenkins, to play for Pontypridd. 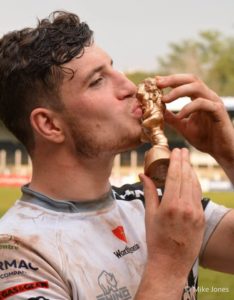 Owen came up through the ranks of the Blues Academy and in the summer of 2012 was given a placement with Pontypridd. Over the following four seasons he made his mark as a pacey winger with an eye for the try line, crossing for 13 touchdowns in his 48 club appearances.

Having previously been capped by Wales at under 20 level, Owen was drafted into the national Sevens squad, and given on a full time contract which ended his association with Pontypridd.