Born in nearby Church Village and learning his rugby trade with Beddau Juniors, Gethin Jenkins moved on to Pontypridd to play at youth level. 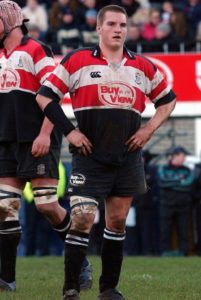 Although turning out occasionally at second row, Gethin soon developed into a solid loose head prop captaining his team to their Welsh Cup victory in 1998 and honoured at international level by Wales Schools.

Graduating on to the under 21 age group, Gethin was again captain of the Ponty side that stormed through the inaugural Welsh league in 2001 only to be denied the title by an administrative mix up.

A dual registration contract with Rhondda Valley neighbours Treorchy allowed Gethin to develop his skills, playing regularly in their first division campaign, whilst also breaking into the Pontypridd senior setup towards the end of the season.

Gaining further representative honours for his country, Gethin received the ultimate accolade of being voted Welsh under 21 player of the year for 2001 underlining his tremendous potential as a star of the future.

Gethin went on to become a stalwart of the Ponty front row, and a regular choice for Wales, with his dynamic performances in the loose.

He left Pontypridd in 2003 to represent the Celtic Warriors, Cardiff Blues and French club Toulon.