Having earned a reputation as an abrasive back rower with Newbridge RFC, and notoriously having had his jaw broken by Pontypool and Wales scrum half David Bishop, Chris Jarman joined up with Pontypridd in 1989. 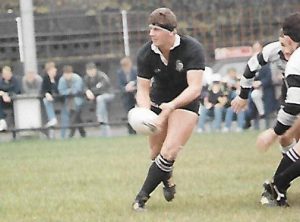 Primarily a no8 but able to cover in the second row, Chris fitted in well with the forward orientated ethos of successive coaches Clive and Chris Jones and then ‘Spike’ Watkins.

A move to Newport followed in November 1991 but only to return to Sardis Road in 1993 to complete one more season with the Valley Commandos. In his two spells with Ponty Chris made 74 appearances with an impressive tally of 25 tries scored.