Hailing from the Pembrokeshire seaside resort of Tenby, Shaun James played for the town’s youth team before moving on to represent Llanelli at the same level.

Upon graduating on to the senior age group there followed a return to Tenby in 1999 before joining up with west Wales neighbours Carmarthen Quins, helping them in their climb up the league ladder. 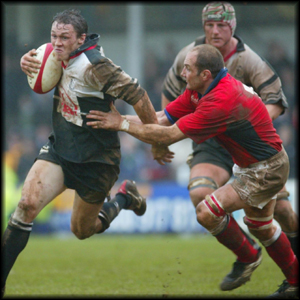 Shaun’s prowess as a strong running centre was noted by the Welsh selectors as he played a prominent role in the Wales under 21s Six Nations Championship campaign of 2001.

Having moved to study sports science at the University of Glamorgan, Shaun accepted the chance to join up with Pontypridd in the summer of 2001 and doing so as one of the most promising young threequarters in Welsh rugby.

Further international honours followed with a call up to the Welsh Students squad, and an extended run in the national sevens set up.

Shaun moved on from Pontypridd at the advent of Regional Rugby to play for the Celtic Warriors, joining Cardiff Blues when that region folded.