Originally from the Cynon Valley town of Aberdare, Rhys James moved eastwards to play his senior rugby with division one club Merthyr. 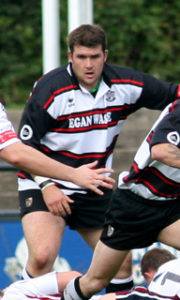 As Pontypridd looked to bolster their tight five options in preparation for the 2006/07 premiership campaign, Rhys was taken on as a senior squad member, having impressed as a summer trialist.

Finding his options limited at Sardis Road, Rhys moved to Merthyr at the end of the 2006/07 season before joining Bedwas in 2009.