Born in Mufulira, Zambia, Dafydd James played for Bridgend before joining up with Pontypridd in 1997. 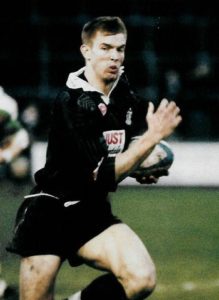 A strong running centre, he crossed for 23 tries for Pontypridd in their domestic and European campaigns, and was a regular in the Wales senior team, going on to represent the British Lions on their tour of Australia and New Zealand in 2001.