A product of his local club Pontardawe RFC, Ashleigh James represented Swansea, Neath, Llanelli, Cross Keys and Bridgend at Premiership level. His five year stint at the Gnoll coincided with Neath’s domination of the league, crowned as champions on three occasions. 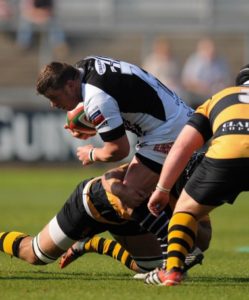 A senior member of the Bridgend squad, James was nominated as club captain and led his team to SSE SWALEC Cup triumph, ironically against Pontypridd, in May 2015. He then made a move to join the Sardis Road club during the ensuing close season.

A former Wales u16 and u18 international, James brought valuable experience and dynamism to the Ponty front row, making 30 appearances before departing the club in January 2017.