Commencing his career at Treorchy minis and youth, Rhondda-born fullback Matthew Hutchings graduated to the senior set-up whilst also plying his trade with Neath at under 21 level. 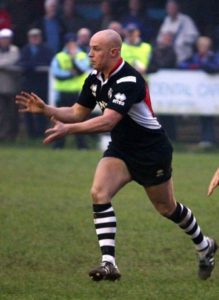 After a season with neighbouring Valleys team, Treherbert, Matt joined Bridgend Ravens in the summer of 2005.

In his two seasons with the Ravens, Matt enjoyed the distinction of playing in the 2006/07 Konica Minolta Cup Semi Final at Sardis Road!

His reputation as an adept and fleet-footed attacker earned Matt an invitation to join up with Pontypridd for the 2007/08 season. The ability to cover at both full back and outside-half, and his status as a front line goal kicker, enhanced Matt’s status within the Ponty squad.