A product of Merthyr RFC James Howe progressed through the club’s junior and youth ranks, going on to represent the Blues age grade squads up to under 18 level.

It was in a Welsh Cup quarter final tie against Pontypridd in 2011 that Howe gave a good account of himself, his attributes as a dynamic operator in the loose and a solid scrummager to the fore. 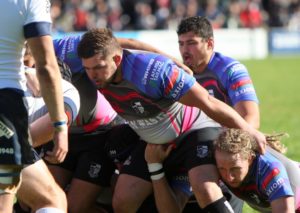 James Howe joined up with Pontypridd in the summer of 2011 and made nine senior appearances for the club during the ensuing season. A move followed to Championship club Bargoed RFC where Howe continued to develop his game.

Seeking to bolster their depleted prop resources at the commencement of the 2013 – 2014 season, Pontypridd once more called upon Howe to join up with the squad.

James Howe made a move back to his club of origin Merthyr in the summer of 2015.