Maesycoed born and bred, Cory Hill was a fervent Ponty supporter since his childhood days, and represented the club throughout all age grades up to under 15 level.

His huge potential as a hard grafting lock forward was rewarded with Wales caps at under 16 and under 18 levels, and an allocation to the Blues age grade system. 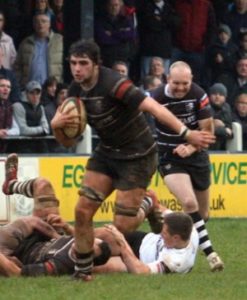 The dream of representing the club which he supported throughout the years became reality for Cory on 21st April 2010 when he was called up to make his senior debut for Pontypridd in a league game against Llanelli. He duly put in a storming performance and scored two tries in the process.

Cory Hill remained with Pontypridd as one of the club’s allocation of Blues Academy players. Released from his regional contract in the summer of 2013 Cory Hill was signed up by English Championship club Moseley RFC.He went on to represent the Dragons and to be capped at senior level by Wales.