Cory Harris arrived in Wales in 2000 after a spell at Canterbury ‘B’ in New Zealand, and on the recommendation of then Wales coach Graham Henry, joined up with Pontypridd. 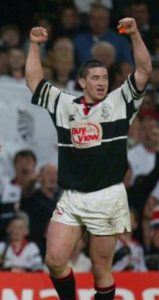 His effective displays as an openside flanker reached their peak with a “super-sub” appearance off the bench in the 2002 Welsh Cup final, when Cory proved instrumental in clinching the trophy for Pontypridd.

Cory went on to play for Bridgend, the Celtic Warriors and Newcastle Falcons.