Having represented his home town club of Rumney, in the eastern suburbs of Cardiff, through junior and youth levels, Grant Harrington broke into the senior ranks in 2001, playing in the first division for a team that was at the time coached by former Ponty legend Eddie Jones. 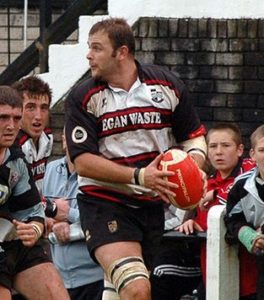 Having gained recognition with South Glamorgan County at youth and senior level, Grant was invited to play on permit for Pontypridd during the 2002 campaign, making his debut in a home game against Neath.

His abrasive style of play in the loose, and ball winning abilities in the line out, earned Grant a permanent move to the Sardis Road club in the summer of 2003. Over the following seasons Grant established himself as a physically imposing lock forward, and a senior member of the Pontypridd squad.

During the summer of 2010, Grant departed Pontypridd to join Cardiff.