Centre, Carl Gupwell was a member of the Pontypridd Youth team, graduating to the Senior XV during the 1988/89 season.

On November 8th, 1988 Carl came off the Pontypridd bench to replace club stalwart Steele Lewis during the game against Western Samoa. 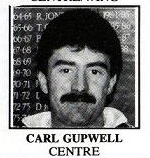 After leaving Pontypridd in September 1989, Carl joined Cilfynydd RFC, latterly becoming an official with the club.

Carl was an officer with South Wales Police.