He was capped at U18, U19 and Youth levels. After two years he moved to the Newport Senior squad as a 19 year old and quickly made an impression at this level. 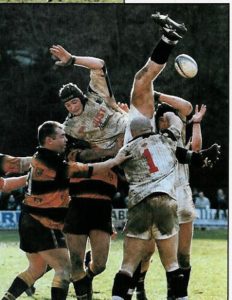 He played over 70 games for Newport gaining U21 and Wales A caps on the way.

Ian finally won his first full International cap under the then caretaker coach, Dennis John, on the South African tour of 1999.

On his departure from Sardis Road in the year 2000 Ian rejoined his hometown club of Newport, and went on to play for the Dragons regional team before joining the Ospreys.